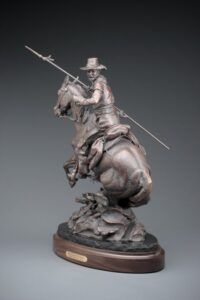 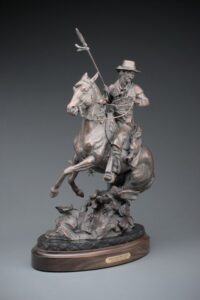 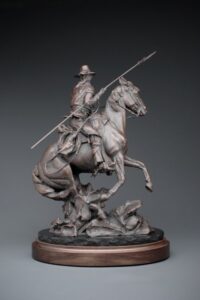 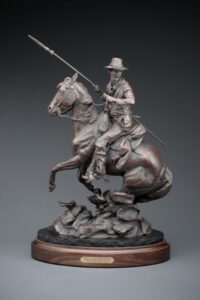 This is a little known story about a little known battle. The year was 1846, and the Mexican-American War had begun. General Stephen Watts Kearney had gone into Santa Fe, taken the city without a shot and was then proceeding on his way to California. After a dangerous trip across the deserts of Arizona and California he arrived at a settlement named Santa Maris and was greeted by Captain Gillespie of the Marine Corps. Kearney was told that a contingent of Californio Lancers had been spotted about nine miles away. Wary of attack Kearney was finally convinced he must because this offered the possibility to obtain fresh horses from the Mexicans. Kearney moved his men into position at night. The bugler was told to sound the trot signal when they reached the valley floor of San Pasqual. However, when the trot was sounded, one of the Captain’s mistook it for the charge signal and galloped off to engage the enemy.

The Lancers had been alerted by another incident that there was the possibility of attack and were waiting. They charged Kearney’s men with saber and pistol, then wheeled and rode frantically away as if defeated. This was just a ploy, however, and the Mexicans ran for about a mile and then wheeled their horses and brought their lances down to re-engage the enemy. Kearny’s men had their hands full with these Lancers. They were finally rescued from their dilemma with help from San Diego troops. These Lancers were irregular troops, and were vaqueros {Mexican Cowboys} that were conscripted into the Mexican Army. Excellent horsemen and handy with a reata, they were a deadly force.

You will notice that this vaquero has his reata tied to the back right side of the saddle, and behind the cantle he has tied his poncho. He is wearing moccasins he would have made and around his lower legs are rawhide tops called botas. These were for protection from rough brush. He has on the typical big rowel spur used by the vaqueros of that time. These had to be put on after he mounted his horse. In his right bota is a knife called bots that he used in skinning cattle. A pistol is in his waist band. His saddle is a wooden and rawhide tree with a mochia over it. This is a piece of leather that was put over the tree. It is border carved and has two pockets. You might also notice the particular way his hair is tied. His stampede string is tightly around his chin. The horse is a spade bit horse with rawhide romal reins that he would have made. He is in the process of turning his horse after running from Kearney’s men and bringing his lance into position. His face says it all as he looks at his charging enemy. This piece is a record of the battle of San Pasqual, “When Lancers Won the Day”.