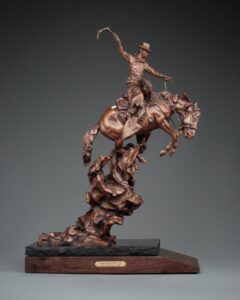 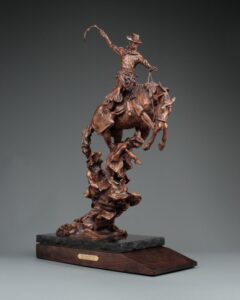 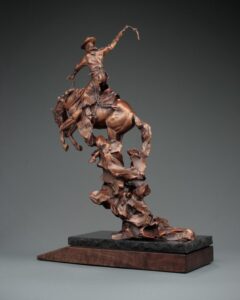 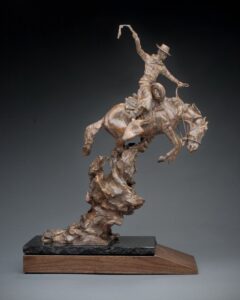 Boy, does this piece bring back some memories!!! It comes from an incident in my life when I was riding for a cutting horse trainer in California. He put me on every kind of horse you can imagine, broncy and not, big and small, smart and not so smart. It was the best education I could have to really learn to handle horses. What we would saddle the horses in the round corral, and then we would work them on the ground for a couple of day. This taught them some basics and took a little ‘snort’ out of them. On the second day or so, I would step on the colt. After that it was a lot of miles and good hands to make the youngster good.

Well, one day, I was asked to step on this mare. She had been there all the years I had worked there. I thought it odd that this mare, being four years old, wasn’t at least started. My boss said “I’d like you to ride this mare a little today”. I, being cocky and unafraid, said “Sure!!” and proceeded to saddle her in the round corral. The first few rides were a little rough, me being bucked a little. She seemed to be making some progress so I continued. Well, at the end of the week, I was thinking it was time to get this mare into the arena and move her along in her training. So there I was, riding this snorty mare who seemed to be gettin’ the idea. It was about the time I was thinking how good this was goin’ when, a train passed in front of the place. Now, that happened every day and was no cause for concern. Today, however, that engineer decides he just had to blow his whistle as he passed. Well, that didn’t set well with this mare, and she swallowed her head and launched into a fit of bucking unseen in the West since the 1860’s. At least, that’s how it seemed to me. I stayed with her for a while, but it wasn’t long before I was watching the satellites orbit the earth, then I was skidding across the round corral into a rather stout railroad tie fence of said corral.

I rode her for many weeks after this, and she never got that buck out of her. I learned afterward that she had been ridden by many others, but had never been broke. I was determined, however, and finally bought her from the guy just because I just knew I could get her broke. I ended up selling her to a rodeo contractor for the bucking string. Oh, the visions of grandeur!

This buckaroo’s saddle is a Wade, with 22 inch eagle bill taps. It is corner carved on the saddle and full carved on the taps. He is wearing nice drop shank spurs with jingle bobs on his boots. The gelding, {yes, I made one minor change in my story as I really like to ride geldings}, has a hackamore in keeping with his being green. The flat hat, chink and assorted silver, makes this a good buckaroo outfit. The dust was flyin’ round that corral, as I got a very special “View From The Top”.