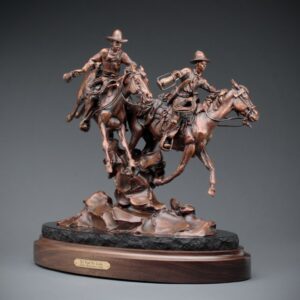 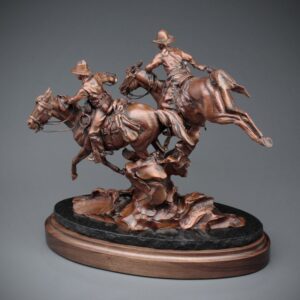 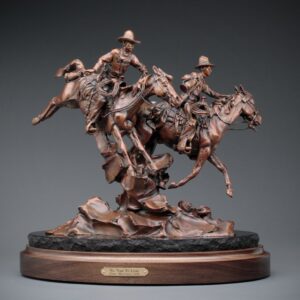 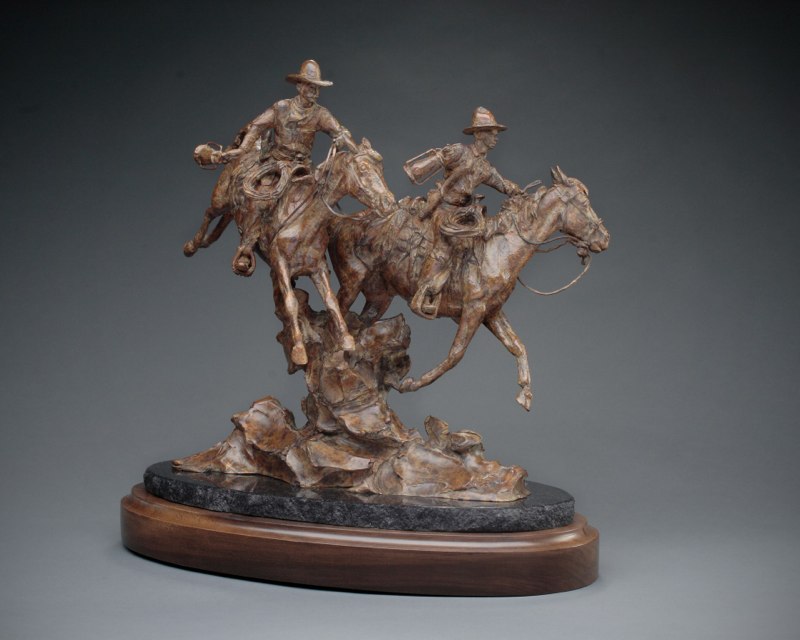 This piece represents one of the most wonderful stories I have come across in a while. As many of you know, I read a lot, looking for the stories that are not well known and will work sculpturally. This is one of those stories that I love to find. It comes from a book called “Boss Cowman” by Ed Lemmon. This man was a good cowman. He managed the largest fenced pasture in the world, at one time it was 865,000 acres. He handled more cattle {over one million cattle} than any known man at the time. He was a part of the great cattle drives of the West in the 1860’s through the 1880’s. With a resume like that, no wonder there is so much in this little book.

Lemmon tells of the way he handled stampedes on these trail drives. We think of the classic turning the leaders to get them to mill, but this had its problems. These stampedes were usually at night and when you got these cattle running flat out it was dangerous for men, cattle and horses. They would get to milling around in a circle, although this eventually slow them down, it also caused a lot of crippled and maimed cattle. This was not so good for the bottom line. So Lemmon tells how he handled this.
He kept a lantern lit inside the wagon, hung on the wagon bow. Each of his wagons had a dozen lanterns with them. When there was a stampede, every cowboy was instructed to grab one of those lanterns, light it, and dash for the lead steer. When the cattle saw these lanterns as they strung out alongside them, it seemed a sign of home and they would begin to slow down. As they slowed to a walk the were lead back to the bed grounds. The outfits that did this were known as “lantern outfits”.

What a great story! These two cowboys have just grabbed their lanterns, and are on their way out to stop a stampeding herd. They are both riding typical Texas trail saddles, built by Grossman and Schleutker & Company. Both are Sam Stag rigged, double cinches. They were the most common type of trail saddles used during these drives. You will notice that the front cowboy has no leggin’s. He has just jumped his horse from his bedroll. He is also a younger man. He is riding a colt with a hackamore. This tells you he is a green broke horse. The younger guys bounce better than those of us with a few more years. He also has on a straight shank bronc spur which is what he likes. The other cowboy rides a similar saddle but with angora hair saddle bags behind the cantle. He has his leggin’s on because he has been on night guard. Also, he wears cuffs on his wrists. His spurs are a full drop shank spur. Both pair of spurs in the piece were made by August Buermann of Newark, New Jersey. They were inexpensive and very common during this period. His horse has a simple black iron grazer bit, showing he’s a well broke horse.

The dynamic design of this piece befits the subject. I love the masses and the horse at the back suspended in mid air. With cattle stampeding, lightning flashing, and rain pouring, for these cowboys there’s “No Time to Lose”.