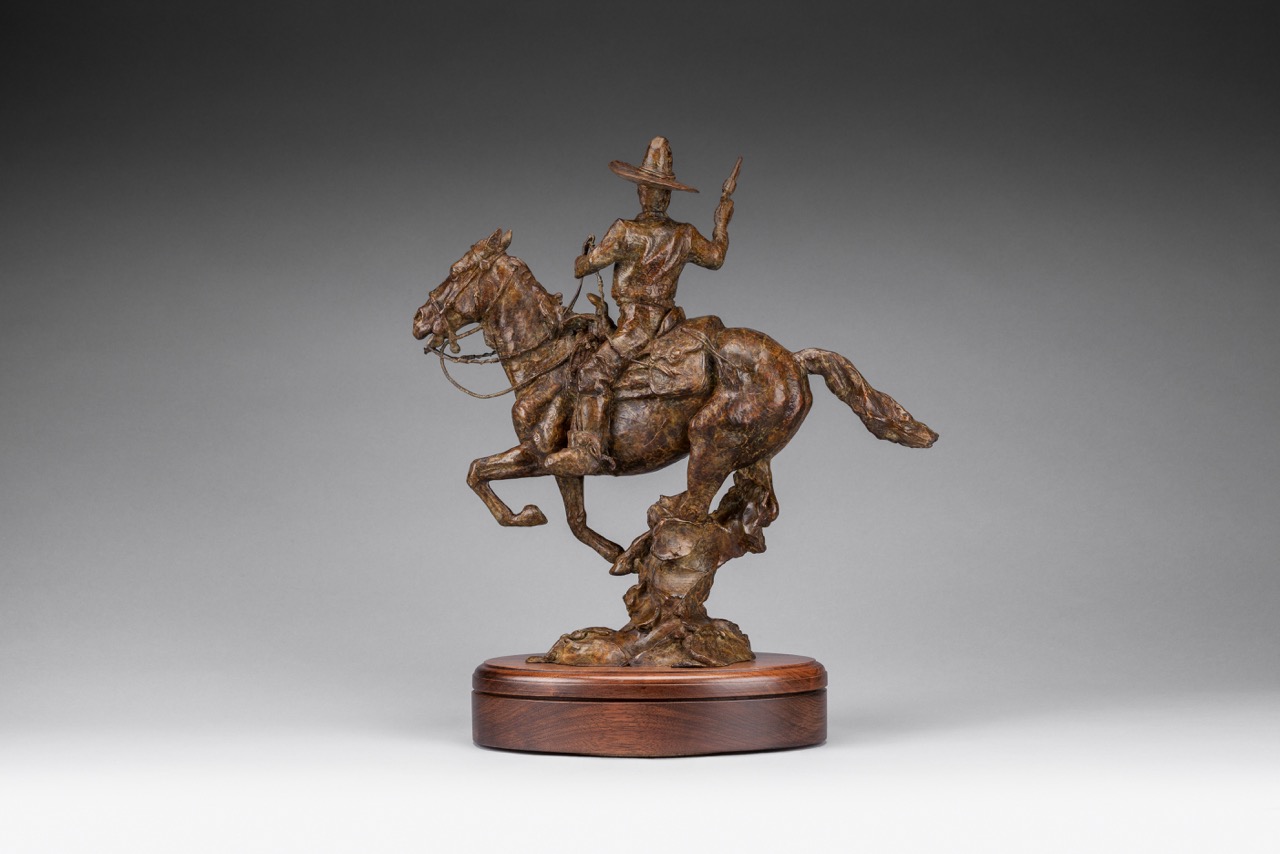 The span of time post Civil War to the late 1880’s is filled with many little know stories and has a great history. This period is largely unexplored in art and literature. This sculpture is about the Arizona vaquero of the Indian War period. The connection between the vaqueros of California and of Arizona is of great interest to me. Many of the cattle populating the ranges of California came right through Arizona beginning with early Spanish settlers in the late 1700’s.

The vaquero of Arizona had a harsh and difficult land in which to work cattle. Unlike his California cousin’s range, the desert here was inhospitable and posed its own unique challenges. It was dry, rocky, filled with all kind of dangerous wildlife  and had very little for cattle to eat. It took many acres per cow to keep them alive and healthy.  On top of that, there was the problem of the Apache and his hatred of the Mexican people. The vaquero never knew when there might be an attack and the Apache would try to steal horses or cattle. It was an ongoing battle, and posed many dangers for these fine horsemen.

Both the vaquero of Arizona and of California possessed the same love of fine horsemanship and skill with the reata. It is against this back drop of our history that this piece was conceived.  The vaquero is out tending cattle, doing the hard work that is required, and suddenly out of nowhere, came a group of Apaches! The Apaches were intent on stealing the cattle the vaquero had gathered. These Indians would sweep down with such surprise. The vaquero often out numbered and with little firepower had to react quickly to get to safety.

A group of raiding Apaches has surprised this vaquero. He and his mount are doing their best to get to cover and out of range of the enemy. He is riding a typical vaquero saddle of this period. The large horn, saddle bags and tapaderos are the style the Arizona vaquero rode. You will notice he is wearing the short jacket of this era. The style goes back to the Spanish traditions from the first explorers. Additionally, he has his pants tucked into his boots. The American influence is beginning to show up in the vaquero dress. For his protection he carrying a Colt revolver.

His horse is a fast one, with a Las Cruces Spade bit and a center tie bosalita around his nose. Center tie meaning a piece of latigo leather is attached to the horses forelock and travels down his face to the rawhide nose band. There is a get down rope around the horses neck, through the bosalita and tied to the saddle. The rope is used to lead the horse.

As this good horse surges forward, his rider leans back, assessing the situation. He will have to think fast, for the pursuing Apaches are “At Close Quarters”.